Home / Without Label / How To Install and Configure Varnish with Apache on Ubuntu 12.04 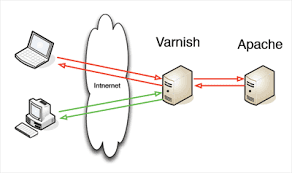 Varnish is an HTTP accelerator and a useful tool for speeding up a server, especially during a times when there is high traffic to a site. It works by redirecting visitors to static pages whenever possible and only drawing on the virtual private server itself if there is a need for an active process.

To perform the steps in this tutorial, you will need to both have a user with sudo privileges and apache installed on your virtual private server.


To create a user with sudo privileges, go through the third and fourth steps of the initial ubuntu server setup tutorial
Apache can be installed on your VPS with a single command from the apt-get repository.

Once you have both apache and varnish installed, you can start to configure them to ease the load on your server from future visitors.
Varnish will serve the content on port 80, while fetching it from apache which will run on port 8080.
Let’s go ahead and start setting that up by opening the /etc/default/varnish file:
Uncomment all of the lines under “DAEMON_OPTS”—under Alternative 2, and make the configuration match the following code:
Once you save and exit out of that file, open up the default.vcl file:
This file tells varnish where to look for the webserver content. Although Apache listens on port 80 by default, we will change the settings for it later. Within this file, we will tell varnish to look for the content on port 8080.
The configuration should like this:

So far we have told varnish that apache ports will be running on 8080. However the default settings for apache are still on port 80. We will correct the discrepancy now. Open up the apache ports file:
Change the port number for both the NameVirtualHost and the Listen line to port 8080, and the virtual host should only be accessible from the localhost. The configuration should look like this:
Change these settings in the default virtual host file as well:
The Virtual Host should also be set to port 8080, and updated line looks like this:
Save and exit the file and proceed to restart Apache and Varnish to make the changes effective.
Accessing your domain should instantly take you to the varnish cached version, and you can see the details of varnish’s workings with this command: